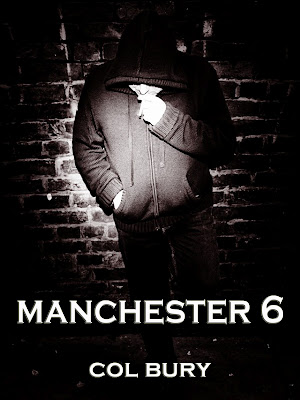 I'm proud of this. Really proud. Put a lot of effort into ensuring the reader gets good value.  Re-reading and re-editing it felt like I was reading someone else's work, and the satisfying thing was, I thoroughly enjoyed it! Never been one to blow me own trumpet, but I'd buy it!!! :-)

I admit, I kinda rushed in last time, but if things hadn't panned out the way they did, I probably wouldn't have reached this point, and learned so much.

And here's a paradox... despite Manc 6 being much leaner, it's also fatter! I've added a few little bonuses for the reader - which I won't spoil here - as well as bringing on board a top photographer in Nigel Maitland to do the covers (yeah, there was an 'S' in covers!). You did a crackin' job, Nige - thanks.  Check out his work here.

NOTE: I kept the same title as it's the same (re-edited) six stories and, more importantly, so that people weren't inadvertently duped into buying the same book (even though I know it's much better than before).

The great thing is Amazon put back up my 23 reviews without asking, which was jolly decent of them. Do me a favour though, even if you don't buy it, agree with the tags and 'like' if you'd be so kind.
Posted by Unknown at 10:05

Going to have to buy it again, really enjoyed it first time around - cheers Col

Huge congrats Col, may it bring the success your hard work deserves.

Cheers, Chris. This new edition is definitely better, mate. Up to you, but if you do, I think you'll enjoy the 'extras', mate.

Thanks, Julie. Absolutely love the cover! :-)

Lil, your help's been invaluable. You are a true friend. x

Looks a lot better now, doesn't it? Very happy for you, Col. My offer still holds up, btw.

I did already leave a comment...honest. Happy for you, buddy! Now, get that feckin novel finished!!!

Working on another, after I've completed the first draft of novel 'attempt 2'.

Cheers, E. I hope Hard Bite goes well for you over at Blasted Heath. x

Saw the link to your blog on Twitter and thought I'd give you a shout out. I love crime fiction and will put you on my "To Read" list for sure.:)

Hey thanks, Serena. That's nice to know. Hope you enjoy it when the time comes.