Sod the footy... Thrillers, Killers 'n' Chillers is back!

After a much-needed hiatus, and all round rethink, I'm thrilled to announce that Thrillers, Killers 'n' Chillers is back, and open for submissions from July 1st onwards.
Click on the title above to reveal more, including a revamp(ire) of the site, new submission guidelines, plus a welcome surprise!
Regards,
Col
Ps. Please feel free to spread the word.
Posted by Unknown at 17:47 5 comments: 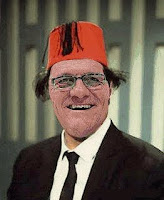 Hi chaps n chapettes,
I will soon be providing updates regarding my hiatus, but am not quite ready yet. However, I couldn't resist a football post - which one could argue is both 'crime' n 'fiction'.

I'm sure most of you are aware that the Football World Cup is well underway in South Africa. England, to coin an apt cliche, have flattered to deceive so far, drawing two of their group games to leave a must-win fixture versus the mighty Slovenia on Wednesday. Maybe we could say the 1-1 draw with the US was our way of maintaining that, somewhat strained, 'Special Relationship' (told you I'd include fiction). But the draw against Algeria was a bridge too fookin far! I made a bold prediction before the match: let's just say I got Algeria's nil correct n leave it at that.

Coupled with the naff performances n players speaking out against the manager's questionable tactics, our camp is in disarray. But I suppose it could be worse, looking at the French squad who imploded n sent a player home which, incidentally, is where they're all heading now (au revoir - he,he!). Poetic justice, I feel, after them cheating v the Irish in the qualifiers.

The passion for the England side is still massively strong over here, with red n white Saint George's flags hanging out of windows on every street, flying on many cars, and no doubt the pubs will be full again for the next game. If our over-paid players could just put their over-inflated egos to one side n just play the game - we bloody invented - at their optimum levels then we'd easily brush aside the Slovenians. Alas, the pressure is akin to a bubbling volcano, as the notorious English press are circling for the kill, so ...sod it ...2-1 England! (more fiction?).

You heard it here first (gulp).

Oh, n the 'crime' bit... well, if we lose n go out it would be a heinous crime committed by our multi-millionaire players against all true England fans.

Hi Folks,
Just a quickie to let you know that my time away from blogging has been utilized to sort out a few extremely important issues. Throughout my hiatus I've tried to keep in touch as best I can with this fantastic writing community we've all created.

I'm on the home straight now regarding the 'important issues' that needed resolving. Despite some of the aforementioned being private, I will be back real soon with updates and things will be much clearer then.
Regards,
Col
Posted by Unknown at 15:34 19 comments: