HARROGATE... NOT A TOSSER IN SIGHT (Let's get positive 'n' have some fun!)

It was my first Harrogate Crime Writing Festival, and I watched and listened in disbelief, from close up in that fateful room, as those gobsmacking events unfolded...

... Waking up to see Crimesquad's Graham Smith's cheek-wobbling face, as he ground his teeth and spluttered like an asthmatic wild boar, was summat to behold I'll tell yer! Horrific? You couldn't make this shit up. (Soz, mate, you know I love you.)

As for the festival itself at the Old Swan, I saw and met lots of very approachable, like-minded, book-loving folk having a ball.  It was tremendous to catch up with friends old and new, and mingle with some of my literary heroes.  Gotta mention Simon Kernick here, who I was thrilled to have a good natter with, and he even remembered my name two days later.  Plus, Stuart Neville signing 'Collusion' for me, as we share the same agent (but, being on the rewrite of novel attempt 2, unlike Stuart, I much prefer the 'scenic route' to success!).

I've had my own feelings from the start on the controversial ebook panel, but have still read other reports with great interest, the one I agree with most being here.  However, I look at things somewhat more simplistically...

I believed early on that it was a publicity stunt, and still do.  I like and admire both Stephen Leather and Mark Billingham, and will continue to buy their books.  I had the pleasure of shaking hands with both of them and briefly chewed the fat (not on their hands, that would be grotesque and a tad bad-mannered).  Also, I will continue to buy both ebooks and, dare I say, 'real' books.  It will all settle down over the coming years, readers will read and writers will write, and physical books will survive.

So cheer the f**k up everyone! (Told you it was simplistic. Now, where's that fence cos I need a sit down.)

I didn't see any cliques, apart from our mob (see photo, with thanks to photographer extraordinaire, Russel McLean), but anyone was welcome to join us, and they did.  To a man, they are top blokes and I'm proud to call them my friends.

There are too many people to mention, but everyone I spoke with was cool, supportive and good fun.  Our mob apart, (who know how I feel about them), special mentions must go to Howard Linskey, for having me in stitches and making Saturday night a cracker.  And, Kevin Wignall, who I just managed to catch right at the end (God only knows who threw him out of that top floor window, maybe the butler?), and who sent me a nice message of advice on Facebook to continue our dialogue. Says a lot about the man, that does.

Anyway, it was bloody brill. Enjoy the snapshots...

Ps. Names keeping popping into me head of more people I chitchatted with, but I'll be here all night, so apologies if I missed you out. You're all splendid folk! ;-)

Pps. I see many a tosser in my job and I didn't see any at Harrogate.

UPDATE 29/07/12- The fallout from Harrogate has astounded me. As I'm sure you're all aware, it's all over the net, but there are too many links and discussions to put here.  If you've a spare few weeks, you can easily find and read them. Alas, I haven't, so I'll be writing...
Posted by Unknown at 23:30 12 comments:

Email ThisBlogThis!Share to TwitterShare to FacebookShare to Pinterest
Labels: Harrogate Crime Writing Festival, Not a tosser in sight 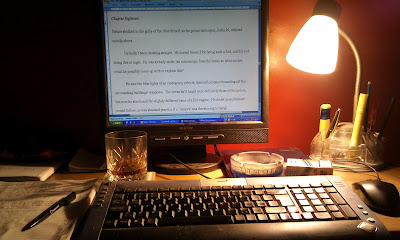 It's five in the morning and I've just finished my second attempt at a crime novel, and sent it off to my agent, Nat Sobel.

It's been a tough year, after getting tantalisingly close with the first attempt, and gleaning amazing compliments from respected editors (who still didn't buy it!), then having to repeat the arduous process, while wondering if I could put myself through it all again.

It sounds like I didn't enjoy the process, but I did, only it's such a strain, mentally, having to try and balance family life, a demanding job and writing.  It's been a very bumpy journey, one only other writers can truly understand, so I hope it's all been worthwhile.

The first 'novel' is sat on my hard drive and, with a few tweaks, I still have faith in it.  Regarding the manuscript I've just sent to Nat, I (we) had a total rethink and it was a BIG ask, throughout which I had to stretch myself more than that bendy bloke off the Fantastic Four!  I'd set myself a target to finish it before the Harrogate Crime Writing Festival.  So mission accomplished! ;-)