Over at indie publishers, Tonto Books, head honcho, Stuart Wheatman, has been working his butt off, trying to keep his head above water throughout the credit crunch. This has delayed the publication of his latest annual short story collection, Even More Tonto Short Stories - aka EMTSS. However, I'm extremely pleased to announce that the definite date it becomes available to the public is AUGUST 5th 2010.

"So, Col, how did you bag a place in such a coveted anthology?"
"Bit nosey, aren't you? But thanks for asking. I guess, I'll have to tell you then."
"Well, we're not that arsed, really, Col, hearing about your poxy short story."
"Why are you here then? To put one of those Chinese porn links on my site? If I ever catch the bas... And, anyway, it's not 'poxy', you cheeky git. It's got stories from real authors in, not just me."
"Okay then, smartarse, name one."
"Matt Hilton."
"Never heard of him!"
"Alright, how's about crime mystery author, Sally Spedding, or Robert Endeacott... plus, it's edited by Caroline Smailles."
"Okay, then, Mister Big Shot, so how did you get in?" (Yawns, scratches arse.)
"Well, since you're so interested.... Just under a year ago I broke me left wrist and was in plaster up to me elbow. And, yeah, I'm left-handed. A novelist friend, Sheila Quigley, mentioned there was a few days left on Tonto's competition to win a place in their popular anthology. So, one-handed, and one-fingered, I tapped away all day, and just manged to make the deadline.
I awaited the results, and Bob's yer Auntie's live-in lover!"
"Well done, I suppose. Anyway, I need to go n watch some paint dry, so am offski."
"No worries, and thanks for popping by."
"See ya... maybe... 說文解 六國文字/六 ................. !"
"OY!!! What have I told you, mum?"
(Joke, it wasn't me mum, really.)
To find out more about the winning stories - including my 4,000 word short, MOPPING UP, introducing characters from the crime novel I'm currently editing - go here.
Regards,
Col
Posted by Unknown at 10:23 21 comments: 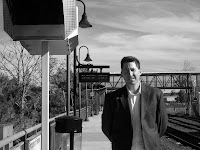 There's a new novel out in the crime genre: Killer Commute by Michael Robert Gordon...

1) So tell us a bit about Mike Gordon n how you ended up writing.

I'm a married man with four wonderful children and a beautiful wife. I feel like I just wrote the lyrics for the Talking Head's song, Once in a Lifetime. Anyway, I work in sales for a logistics company. My past life includes freedom, stints in the Merchant Marines, construction, painter, and fraud investigations for a bank. Writing has always been a part of my life since childhood. It's something I need to do to maintain any sanity; it's a safe nonaddictive escape from the world.

2) I recall publishing your short last summer on Thrillers, Killers 'n' Chillers. It featured Detective Mick Doran. Was this his first tentative step into the big wide world?

Actually it was. I appreciated the response from some of the readers, if I remember you felt there could be more stories coming. I'd like to work on a serial.

3) Killer Commute, give us a blurb.

Mick Doran, a hypochondriac is a veteran detective for the MTA, Metropolitan Transit Authority leads an investigation into the deaths of two attorneys. The problem is he has to work with his ex-wives husband. His investigation leads him to a former conductor, Mitchell Richards. The novel utilizes lyrics from REM's Mr. Richards (from their last album) and captures what the average commuter experiences on their ride on the Long Island Rail Road, but there's so much more. Here's a blurb... just to be clear, Reggie Sanders is Mick's new partner and Kevin Elwood is the first victim.

"Don’t be an asshole all the time. Just once try to control yourself.I know it’s difficult for a prick like you. What happened was a long time ago.
"Reggie laughed. "Right, that’s exactly how I feel. What happened was along time ago. You were under a lot of stress back then. Let it rest,water under the bridge and all that. Right? So, what do you say, let’s work together on this case. Is that cool?"
"Sure, sure."
Mick didn’t care what Sanders thought; his main concern was convincing the DA that he should lead the investigation. And yet Mick knew the reasons were purely superficial. Sanders had stolen Mick’s wife—he didn’t want the asshole leading the case.
Mick’s stomach was killing him. He stepped into the aisle and kneeled on the seat next to Elwood, carefully leaned over to move the corpse's head to check the other side. He saw where the cord had cut off the air. There was a small maroon bruise close to the Adam’s apple.
Slowly, Mick rolled the coat sleeve up the left arm and moved his handover Elwood’s cold flesh, carefully inspecting the veins. There was nothing.
"What are you doing?" Sanders asked.
"Pay attention and learn. I’m determining if he was injected with anything. I’m looking for small punctures. Do you remember that unsolved case back in ’88? A victim was found on a train with a needle-mark in his arm, but he was not a drug user. We couldn’t solve it; spent weeks chasing after false leads. Then another victim showed up. Something like this. The train just pulled into the last station and the victims were found DOA. That was a mess. Passengers were scared of sitting next to one another. We had a letter from the killer. He wrote to Newsday saying he wanted to wipe out anyone who looked at him the wrong way. Turns out it was a hoax."
"Don’t remember. Guess that was before my time."
Sanders moved his immense body into the row of seats behind the body.He looked over Elwood’s neck, and made a note in his book. "It looks like the killer came behind and reached down with a cord or something and strangled him. He was an attorney,you know."
"No shit. Anyone with a brain can tell he was an attorney from the case on the rack. What else do you know about him? Married? Where did he work? Does he have partners? Did we check for a cell phone? Hey,what’s that?"
Mick shined the light onto a piece of paper on the darkened floor.
"What?" Sanders asked.
"It’s a punched ticket. Why would that be on the ground?" Mick inspected the one-way peak-time ticket and noticed the distinct diamond-shaped hole punch, but did not pick it up.
"What do you mean?" Sanders asked.
"If it’s a one-way, most conductors keep the ticket. There’s no reason to give it back. Unless it was used as a receipt or a marker on the seat and it fell down. Mick carefully leaned over the victim and picked up the ticket.
"This is interesting, see the hole in the ticket? Every conductor has their own punch. So there’s no confusion if you transfer from one train to another. Where’s the conductor?"
The ticket was to Port Jefferson. Mick placed the ticket in one clear plastic bag and leaned over Kevin Elwood’s stiff leg and picked up a crushed 16-ounce can of Bud and dropped it in another clear plastic bag.
Mick sighed since Reggie hadn’t answered. "Sanders, is the conductor still here?"

4) So how did the publication become reality n enlighten us about Champagne Books.

Publication was the typical series of queries and rejections to agents and publishers. I would say there was an interest in most of them. One agent suggested I rewrite the novel from first to third person. I did. I thought it would be represented, but they still rejected it. I was looking for a press that would publish books not just e-books. If you're a commuter you want to hold a paperback in your palms. Champagne appealed to me and I noticed there were a low percentage of acceptances. This is important since it tells the writer this publisher is serious about their projects. There are a lot of e-book publishers that will accept your work quickly so be wary of those. I’ve been very happy with the support from the writers and the staff from Champagne, especially the editorial work Cyndi Davis provided. She pulled this book into shape.

5) Any tips, or advice, for aspiring novelists?

Write. Write more often than before. Set time aside each day, you can do it. Learn from your mistakes, make writing a craft, and write more often, but write. Share your work. Believe in yourself. It’s a lonely gig and no one is going to make you write except you. Don't assume you need a quiet place. Killer Commute was written on the train, since I have little time to write. The hour and half each way is a blessing. Be the master of your destiny, I heard that before, but it’s true. We have this gift each day to create a day and fill it with life and what we want. Set a reasonable deadline; write a novel in three weeks. Bang the keys like a maniac. Find a writers group. Do not pay to have your work read or represented or published. There are too many predators that will suck the life and money out of you. If anyone requests a fee, tell them to go fuck themselves.

6) So what's next for Mike Gordon - retirement, putting yer feet up?

Now it's promo time, getting the book out there and trying to line up interviews, reviews, and meet some interesting readers and write whenever and where ever I can.

Cheers, Mike, and good luck with the novel.

To find out more visit him at his blog, http://trainwriter.blogspot.com/ or at http://champagnebooks.com/