If you don't know Paul Brazill, then you haven't got a computer! The man's everywhere - am sure there's two of him. A while back, I commented on TKnC that his writing was / is 'Brazilliant'. And he's a top bloke to boot (not literally of course).

PICTURES OF YOU by Keith Rawson & Chad Eagleton - Darkest Before The Dawn, December 2009.

Purcell is serving ten years in a prisons protective wing. One day he has a visitor. A stranger who shows him a photograph of his beloved wife, half naked and tied up. The deal is this: Purcell’s wife will be set free only after he does them a favour. A dangerous favour. And he has 48 hours to do it.

Pictures Of You is a brilliant piece of hardboiled noir writing from two of the best crime writers around. It’s strong on atmosphere and has meaty characterisation, sharp dialogue, great images and a plot that keeps you constantly on your toes.

BIO:
Spinetingler Award nominee Paul D. Brazill’s stories have appeared in A Twist Of Noir, Beat To A Pulp, Dark Valentine Magazine, Crimefactory, Needle Magazine, Pulp Metal Magazine and Thrillers Killers 'n' Chillers, as well as in the anthologies Radgepacket Four & Five and The Mammoth Book of Best British Crime Fiction 2011. His blog is YOU WOULD SAY THAT WOULDN’T YOU?
Posted by Unknown at 02:15 12 comments:

One thing I've noticed, is that not everyone of us lovers of writing 'n' reading has as big a 'virtual gob' as the likes of little old me! Some writers are simply just shy and, despite their talent, don't seem to get noticed as much as they should. Please read on...

One of these guys is a modest chap, I've previously nicknamed, 'Gentleman Jim', when he was over here on my Guests' Crime Fiction Choice feature not so long ago. Jim Wilsky is a central Illinois native with a lifelong passion for writing and storytelling. His stories are damn good too, and well worth a nosey.

Jim emailed me to say he had a story up over at the popular ezine, Beat to a Pulp. What got me, was the fact Jim said, "I don't have a wide circle of writing friends yet, so I thought I'd ask what one of my blog's two followers thought of my story BIG CAT."

Well, Jim, I say to you, "Roar a little louder, buddy!" and to everyone else...
Let's show Jim that we don't bite! Check out the excellent BIG CAT at Beat to a Pulp, and please feel free to follow Jim at his blog Word Counts.

The Spinetingler Awards, as many writers and readers will know, are among the most respected on the net. So, to see some of your friends on the list of nominees is thrilling. Two of the nominees made my 'Crime Fiction Choice' series, proving the Spinetingler selectors also have impeccable tastes! :-)

I have to say, I'm particularly thrilled that my loyal friend, horror/crime writer extraordinaire, Lily Childs, made the coveted list with her short story Carpaccio. We're so proud to have published this creepy and memorable tale on Thrillers, Killers 'n' Chillers.

Jodi MacArthur's cracker, Pillow Talk, is also among the ten nominees - including, others I'll be checking out from, Matthew C Funk, Nigel P Bird, Chad Eagleton, Steve Weddle and more. Voting starts next week. The full list is here.

Congratulations to all the nominees!
Posted by Unknown at 05:32 6 comments:

This time, as my Guests' Crime Fiction Choices are more than adequately covering the many excellent short stories out there, I thought I'd recommend a stonker of a novel I recently enjoyed in just three sittings. Hence, the longer than usual write up...

To be honest, when I saw the title I wasn't overly enthused. Then I realised it was a song by The Beatles, which pricked my curiosity. I'm so glad it did, as I learned a lot from this book about characterisation.

Maxwell's Silver Hammer is a unique take on life in a tough northern city, in this case Newcastle, and is like no other novel I've read. It reminded me of 'CRASH', the Oscar-winning 2004 film, where several characters' stories were so effectively interwoven. Between sittings, I wanted to ditch everything and find out how the characters were doing.

Being a 'plot-driven' kind of writer myself (but that may change after reading this book), I was somewhat taken aback by Andy's no nonsense writing style and at how he, brashly, used the characters to drive the book forward. It was really intriguing to see how it all panned out, because the author, somehow, got me empathising and caring about the characters early on.

Another thing that struck me was, initially, flicking from one person to another - sixteen in total - I wondered if Andy had made a monumental mistake, because I'd always thought it best to have a protagonist, an antagonist and a few peripheral players. However, I'm pleased to say that Andy's prowess shined through and he came up trumps.

The plot is, paradoxically, both simple and complex. Simple in that, the basic storyline surrounds reformed tough guy, Billy Reeves, and his lifelong rivalry with Newcastle's top man, Vince Merry. When those closest to Billy are under threat, the beast within him is unleashed. Yet the complexity involves the skillful linking-in of all the characters, and you soon realise why each and everyone of them were relevant to the overall story.

With a fast pace, gritty edge, extremely strong sense of place and laugh out loud humour, and an ending that finally made me realise why the title was chosen in a 'goosebump moment', I implore you to buy this cracking book here.

I tip my hat to Mr Rivers.

BIO:
Andy Rivers has been a Butlins barman, pretend chippieon a Spanish construction site, coach holiday rep, mobile sandwich salesman and outdoor traffic cone washer to name but a few of his eclectic 'career' choices. Originally from the East End of Newcastle he now lives in Oxfordshire where, as well as following Newcastle United around the country, he passes the time by indulging in his passion for ‘Professional Geordie-ism’ and lager. This is his first novel but he is also the author of ‘I’m Rivelino’, also published by Byker Books, a hilarious account of the thirty odd years of hurt he has suffered at the hands of the Magpies. With the royalties from this book he plans on buying a Ferrari and having a proper mid-life crisis.
Posted by Unknown at 00:47 13 comments:

Recently I’ve been privileged to be one of the few hot-off-the-press readers to peek at Anonymous-9’s completed novel length manuscript of Hard Bite. And, in my humble opinion, a humdinger of a novel it is. Tightly plotted and twisty narrative, great characters, a page turner….

But I digress because today I’d like to beg a few minutes of your time to acquaint you with the original, award winning short story.

When Col kindly asked me to write a few words for this feature I immediately thought of Hard Bite. Why? Well, when I first read this story it just struck a chord. Had me thinking, Hell, I wish I could write like that. And, whenever I re-read this story (which I do) it inspires me to try…

It's important to admit the truth to yourself, even if you lie to others, and I do a lot of lying in my line of work. Inside my head, I try to keep the truth black and white, no grey area: I like to kill. I love to kill, people.

So starts Anonymous-9’s Spinetingler award winning short story Hard Bite; published online at Beat to a Pulp and in print within the BTAP Round One anthology.

Did the voice get your attention? Grab you by the throat and shake you a little? Mulling over a decision: Should I connect with this nut job and keep reading?

I think it did.

Because for me it is the voice of A-9’s wise-cracking protagonist that is the key to this brilliantly told story.

As the piece unfolds you realise that this is not just a cold hearted, deranged and cynical psychopath but, after a cruel blow by fate, a wheelchair bound cripple. Who is hell-bent on bringing righteous vengeance to evil people.

The killer is talking to you. Calling you buddy so you will set aside any preconceived ideas or prejudice; engage and listen to his story.

And, what an original tale it is.

I kill for extremely personal reasons. Starting with the individual who hit me with his black BMW, carrying me ten blocks on the grille, braking so I'd fall off, and gunning over top of me, shattering my neck, crushing my left arm and feet, and squashing my large intestine to mush. I can't digest much of anything, but my dick still works. Go figger.

But for me it is all about the voice.

Don’t just take my word for it; check it out. And when you have been blown away by Hard Bite check out M-N-S (n): murder-necrophilia-suicide at Plots with Guns and The Master Bedroom also at Beat to a Pulp.

Hard Bite is not just a one off. Anonymous-9 is a seriously talented writer, transcending the Crime and Horror genres. This mysterious lady has been nominated for a Spinetingler award for Best Short Story on the Web twice over (2009 & 2010); winning it once (2009).

My hat is doffed to you, A-9 and thanks for the entertainment!

And thank you, Al!

BIO:
Alan Griffiths, a rookie writer, hails from the badlands of South London, England. His fictional crimes can be found on websites such as: A Twist of Noir, Thrillers, Killers n Chillers and Radgepacket Online. His story, ‘Concrete Jungle’, features in the e-book anthology Discount Noir published by Untreed Reads. ‘Say Hello, Wave Goodbye’ will be published in the forthcoming Byker Books anthology: Radgepacket – Tales from the Inner Cities Volume 5. His literary hero is Ernie Wise and when the mood takes him he blogs at: http://britgrit.blogspot.com/
Posted by Unknown at 12:41 8 comments:

Lee has texted me with a heartfelt "Thanks" to all those of you who offered your support. Having now moved homes, he's sorted one of his 'issues', at least, and he hopes to be back on the net soon. I knew I could rely on you folks to help lift Lee's spirits, so hopefully we'll have him back in the near future.
Posted by Unknown at 19:22 8 comments:

Email ThisBlogThis!Share to TwitterShare to FacebookShare to Pinterest
Labels: friendship, lee hughes, thanks 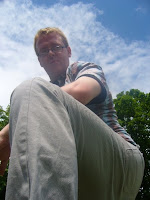 I've been in constant contact with 'The Big Man from the Isle of Man', and have just come off the phone to him. In brief, he's had a shitty run of luck in his personal life and has a few very important things to sort out.

He knows I'm doing this post, but he doesn't know I'm asking for you all to leave a comment below to give him that boost he currently needs - maybe your favourite story of Lee's, a funny moment shared, or just some good wishes.

For my small part, on my new website, I've just resurrected one of my favourite stories penned by Lee, from the archives of Thrillers, Killers 'n' Chillers... you can read it, rate it and comment here.

I know our fantastic online writing community will show this talented writer, and friend, just how much we care, to hopefully accelerate that day when he'll be back with us all again.