A great day for Great Britain... or just the rich showing off to the peasants? 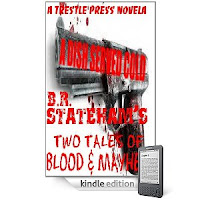 'A Dish Served Cold - Two Tales of Blood & Mayhem, from the 'Call Me Smitty' series, is now on Kindle. I know the central character pretty well, having published two of B.R.'s 'Smitty' stories on Thrillers, Killers 'n' Chillers.

Smitty lurks in the shadows, waiting to dish up poetic justice with blood dripping from the plate. Don't be deceived by those dark eyes - he's a killer with a heart, and a conscience, but mess with Smitty 'n' you're in deep shitty!

For a short intro' to Smitty go here.

Learn more about the author B.R. Stateham here.
Posted by Unknown at 18:43 4 comments:

My story choice, because of its action and adventure plus heart, is “Six Bullets for John Carter,” by Chad Eagleton, published by Beat to a Pulp in 2009, and archived under the science fiction genre.

In a futuristic world where love and intimacy are rare, even obsolete, the unnamed hero of the story steals DNA from an unknown girl on a train and clones her. As she “develops” in a tank, he feels love for her, and her “birth” awakens the emotional life within him,

“But no one prepared him for the long wait, watching the cells begin to coalesce, seeing the body form and move and swim in the nutrient soup. No one told him about the feeling he'd get in the pit of his stomach when the eyes opened and stared at him.”

He originally created this girl to sell to “John Carter” a generic name for those rich enough to buy black market human clones. But in the middle of the sales negotiation, the hero backs out, and gets punished for it.

“The bodyguard's first punch splattered his nose. The second popped his chin back, clattering his teeth together as his attacker stomped on his instep. The third...”

He loses his girl to John Carter, but returns for revenge. Successful, he takes a fatal bullet in the process. While dying…

“He looked up at the twin moons staring down at him with full, silvery eyes, and said, aloud, "But I know who I am...for the first time."

On the simplest level it’s the story of a man taking revenge. Dig a little deeper, and there’s an emotional through line that explores love, leading to a final discovery of self.

Chad Eagleton has recently received a Spinetingler Magazine nomination for Best Short Story on the Web 2011.

Find out more about Chad Eagleton and his work at http://cathodeangel.blogspot.com/

Find Anonymous-9 at http://www.anonymous-9.com/Website_of_Anonymous-9.html
Posted by Unknown at 00:43 8 comments:

My flash, BROKEN, gets an overdue airing at Jeanette Cheezum's swanky site...

One of my earlier efforts at flash fiction is one I'm quite proud of. I penned it in a matter of minutes back in 2009 when 'the muse' struck, and it remains a favourite of mine. Check it out at writer, Jeanette Cheezum's 'Cavalcade of Stars'... and feel free to let me know what you think. If you're hungry, have a browse around Jeanette's place, as there are lots of goodies for you to nibble on.

The Full Nine Yarns... over at Thrillers, Killers 'n' Chillers...

Nine mighty fine short stories, from writers old and new, uploaded in a day. Pour yourself a drink, enjoy and, if you have time, please support the authors by leaving a comment. Thrillers, Killers 'n' Chillers.

Thanks,
Crime Editor, Col
Posted by Unknown at 23:51 2 comments: