https://www.youtube.com/watch?v=MsP7ouqc1i8
Posted by Unknown at 21:02 No comments:

Way too much to catch up on over the last year, so just a quick post to say Theakston Old Peculier Crime Writing Festival beckons and I'm honoured to be reading a short story along with nine other far more talented authors at Harrogate's first ever 'Noir at the Bar'. I'll also be 'starring' in the North v South crime writers' footy match. Should be fun. Hope to see you there. 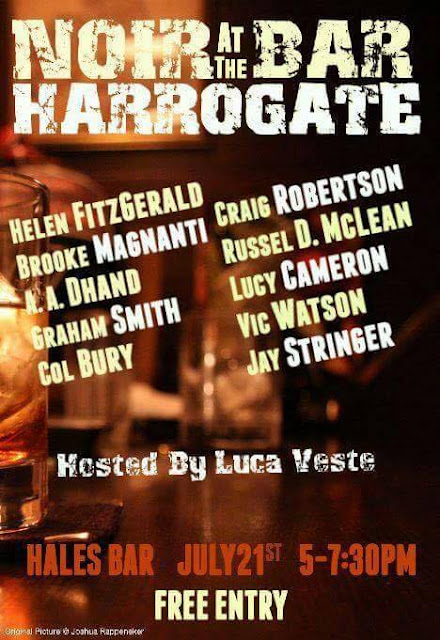 At long last the launch of my debut crime novel MY KIND OF JUSTICE is upon us. I'm naturally both nervous and excited. A big thank you to Urmston Bookshop for helping with the arrangements and to Matt Hilton for asking the questions. Here are the details...
(Note: the launch is at Urmston Library, not the bookshop.) 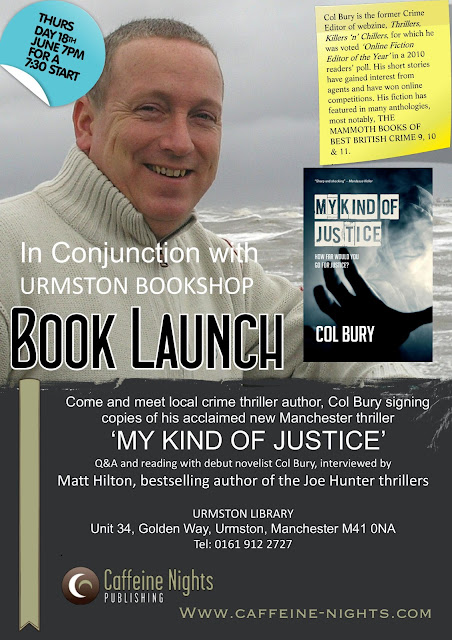 It would be great to see you there, but if you can't make it then here are some links to order...

Cover and Blurb of Debut Novel, MY KIND OF JUSTICE - out June 2015.

Newly-appointed DI Jack Striker, of GMP’s Major Incident Team, has a dark secret, one that would land him in prison.
Striker’s first case seems a straight-forward gang-on-gang slaying, until a notorious youth is found hanged. Before any chance to investigate, bodies begin stacking-up.
With the hot breath of the brass burning his neck, including hard-faced DCI Maria Cunningham who’s onto him, Striker knows this case will make or break him.
The media-dubbed ‘Hoodie Hunter’ mixes MO’s, leaving few leads, and Striker recognises the work of a highly-skilled vigilante killer.
When Striker’s nephew is put into a coma, it becomes personal. Desperate, he runs an unofficial op’ with trusty colleagues, stunning DC Lauren Collinge and un-PC DC Eric Bardsley, placed in the line of fire.
The killer’s trail leads Striker into his own shady past, but will he catch the Hoodie Hunter before he or a colleague becomes the next victim?

If you can't wait till June, DI Jack Striker and the Hoodie Hunter feature in the short story, MOPPING UP in the ebook collection, THE COPS OF MANCHESTER.
Posted by Unknown at 18:22 16 comments:

Email ThisBlogThis!Share to TwitterShare to FacebookShare to Pinterest
Labels: blurb, Caffeine Nights, cover, debut novel, mopping up, My Kind of Justice, The Cops of Manchester

I'm over at BRIT GRIT ALLEY... "SEEKING THAT VALIDATION OF A ‘YES’: THE ROAD TO PUBLICATION…" 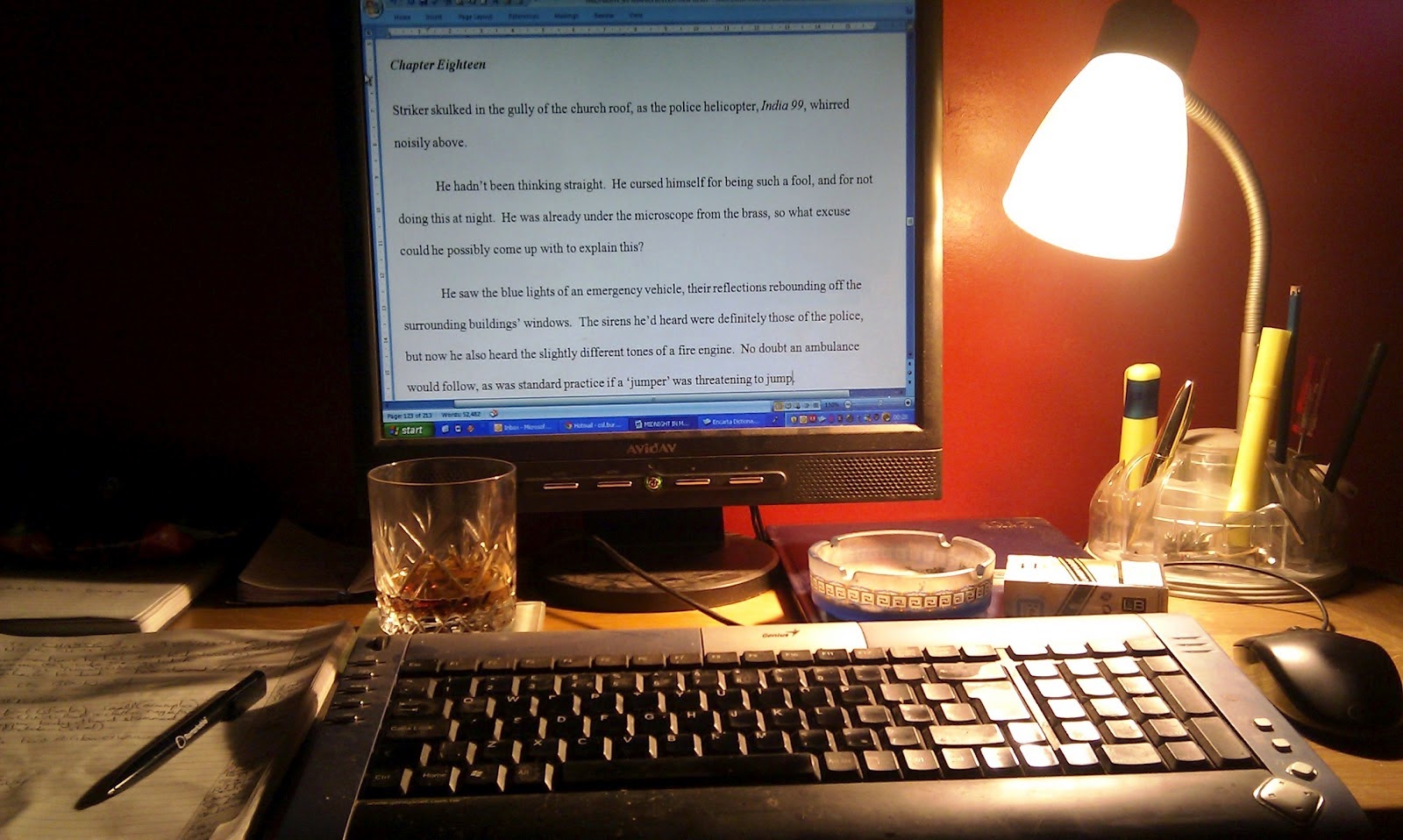 Noir-man, writer extraordinaire and all-round good egg (or all-oval), who is everywhere all the time, Paul D. Brazill kindly asked me to share my thoughts on how I (finally) got published. So, I'm over at the salubrious(ish!) BGA spilling the beans...

IT'S BEEN A LONG OLD JOURNEY AND I'VE FINALLY REACHED THE START...

After years of trying to be published traditionally, and several false dawns and near misses, I finally bagged a book deal. It's the boost I needed at the perfect time as it's been a somewhat frustrating experience and my head was turned numerous times by the successes of some self-published friends. However, I resisted because deep down I yearned for that validation of a "Yes" from a publisher.

I'd just like to thank my many supportive friends and the readers who offered feedback, which spurred me on in dark times. And, of course, a big thanks for the faith shown in my writing by Darren Laws, the head honcho at Caffeine Nights Publishing, who will publish my first novel, MY KIND OF JUSTICE, later next year.

Now, with impeccable synchronicity, the sun is shining in 'rainy' Manchester and I'm off to Harrogate Crime Festival to celebrate!
Posted by Unknown at 12:50 14 comments:

Email ThisBlogThis!Share to TwitterShare to FacebookShare to Pinterest
Labels: and breathe, Caffeine Nights, Darren Laws, debut novel, Get in, My Kind of Justice, Praise the Lord, publishing deal

It was an honour to know and meet you, AJ Hayes (Bill). 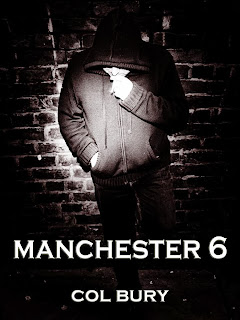 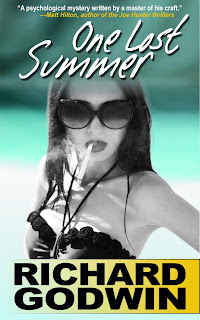 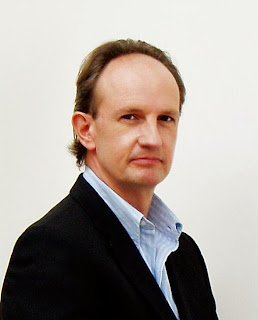