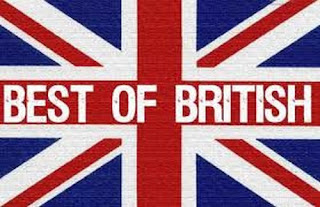 The popular 'Brit Grit' series rolls merrily on, and I'm honoured to feature this week. To read about my top twenty 'Best of Brit Grit Blogs' over at Elaine Ash's cool website, go here.
Posted by Unknown at 18:18 4 comments:

No, I've not been lining up me dog's number twos 'n' counting them. Just noticed my hit counter has packed up, 'n' so has TKnC's. WTF? Is it blogger playing up again, or have so many people been visiting that it's seized up? (Yeah, right). Can anyone shed any light on it? Cue the torch jokes...
Posted by Unknown at 23:04 13 comments:

Unfortunately, it's not crime fiction, but real crime that's dominating my thoughts at the moment. Dark, metaphorical clouds hang over England, including my beloved city, Manchester. I won't ramble on about it here - I'll just say, "sub-human scum" and leave it at that. However, I've been having a 'Chin Wag' with a good friend about this and other stuff, where I do say a lot more, including my endeavours with agent, Nat Sobel.  It'll be a 'warts 'n' all' affair, so watch out for that soon! 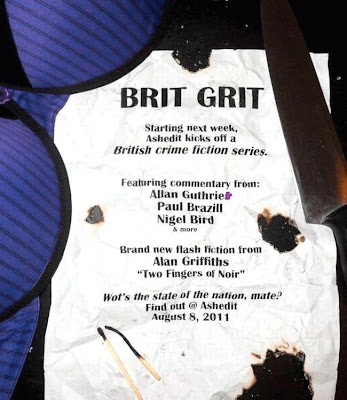 I'm also honoured to be involved in the new 'Brit Grit' series, which started last Sunday with Alan Griffith's superb short, 'Two Fingers of Noir'. Thanks to writer/editor, Elaine Ash for setting the whole thing up over at AshEdit. As you can see, my name didn't quite make the promo poster, but I'm in good company with Ian Ayris... One day, Ian, one day... :-)
In other news... Paul Brazill's 'Drunk on the Moon' series rolls merrily on... Dave Barber's back from his jollies, now editing again at The Flash Fiction Offensive... Matt Hilton's latest Joe Hunter thriller is out... and I had the pleasure of publishing a crackin' short by a reviewer who can actually write! Luca Veste's 'Time' is over at Thrillers, Killer's 'n' Chillers.